Public policy can play a powerfully positive role in making the world a better place. And it can help nonprofit organizations make important advances that create lasting, positive change. True solutions, instead of temporary fixes.

But just as public policy can be a source of tremendous good, so can it be a destructive force that harms the people and communities our organizations serve.

That’s because when it comes to our missions, the impact of changes in public policy is rarely neutral. And – as leaders of our organizations – that means that we cannot be neutral either.

Stand for Your Mission

Nonprofit advocacy is not about partisan politics. And it’s definitely not about political candidates.

Advocacy is about educating decision makers about the impact of the public policy decisions they are contemplating. It’s about helping them understand how the people and communities we care about will be impacted. And it’s about making sure that we aren’t sitting on the sidelines while decisions that would positively or negatively impact our missions are being made.

The Stand for Your Mission campaign seeks to unleash the power of the nonprofit sector through advocacy. It flows from a deep belief in the role of nonprofit organizations in identifying solutions and finding common ground. And an unwavering commitment to the communities and people we serve.

Learn more about how your board can be a part of it. 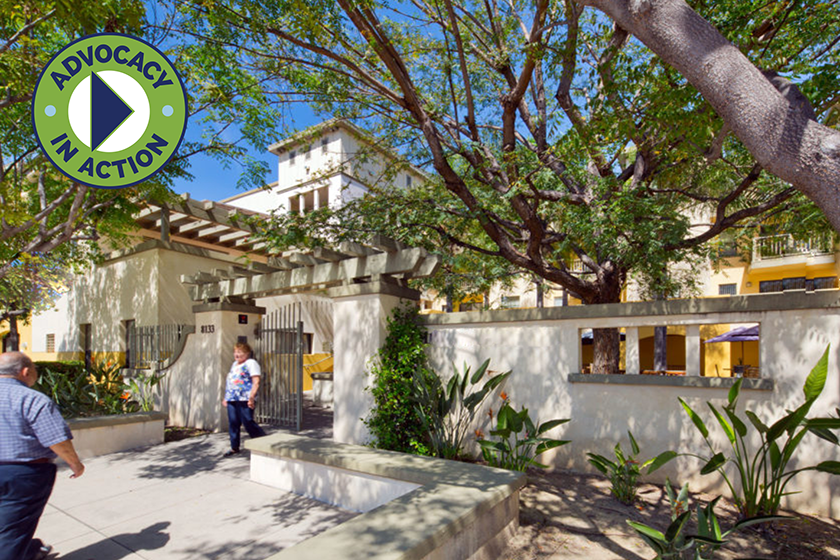 In the mid-2000s, the housing affordability crisis spiked in California while public funding sources to support the production and preservation of affordable housing began to rapidly decline. Between 2000 and 2012, 91% of the very low-income households in Los Angeles county were sending more than 30 percent of their income in rent. This increased need for affordable housing outpaced the production of new, affordable homes. At the same time as this crisis, the region was faced with a 64 percent decline in its federal and state housing subsidies and the dissolution of redevelopment agencies in the state. It became increasingly apparent that Abode Communities needed to commit more of its resources to policy and advocacy efforts to increase awareness and bring much needed resources to the work of producing and preserving housing for low-income Angelinos. The board adopted a Board Policy and Advocacy Plan to outline the organization's commitment to advocating for change and to demonstrate an unwavering commitment to improving the lives of residents and communities. The organization's advocacy efforts have resulted in the passage of two major state ballot initiatives to support the production of permanent housing for people experiencing homelessness and the preservation of key housing programs at the federal level.

Nonprofit organizations can engage in advocacy in a variety of ways. You may lean more heavily on one of these than others, depending on the issue facing your organization, your strategy for change, and your organization’s preferred role.

Help inform and activate your organization’s network in support of important policy issues.

Any time there are public policy decisions that could positively (or negatively) affect your organization and the people and communities you serve. Even if your organization does not have its own policy expert, you can activate your network by tapping into insights and strategy from coalitions or other organizations with similar missions or priorities.

The National Older Worker Career Center (NOWCC) had a successful model for engaging experienced workers in work within a federal agency, but was eager to scale the model through partnership with other agencies. NOWCC launched an effort to highlight and celebrate the value of the experienced work program, which resulted in a legislative win to authorize a program beyond the first agency.

Analyzing how specific policy issues impact (or would impact) the community you serve.

When a set of issues needs to be better understood or documented in a way that creates a compelling case for public policy change.

How advocacy helped document a need for stronger civic education.

Illinois had the weakest civic education requirements in the country, which was creating what the Citizen Advocacy Center (CAC) considered to be a civic health crisis. CAC collaborated to author the “2010 Illinois Civic Health Index,” which became a fundamental building block to educate the public and elected officials of the dire need to bring civics back to Illinois’s public schools. Efforts were successful, and civic education in Illinois public schools has been transformed as a result.

Educating policymakers (and/or the general public and media) about how an issue or piece of legislation is impacting or would impact the people and communities you serve.

When there is a clear case for a public policy change, but decision makers are not necessarily well-informed about the issues or impact on the community.

How advocacy reversed a decision that would have hurt youth living in shelters.

New state guidelines would have made the Anacortes Family Center (AFC) ineligible for state funding, based on broad application of a philosophy that requires organizations to keep their programs open to all. But as an organization serving children who have experienced trauma, AFC felt strongly that it needed to bar participation from individuals with convictions for crimes against children, sex crimes, or violent felonies — a restriction that would have made it ineligible for continued funding.

AFC worked to educate state officials on the impact of this policy change, which resulted in the state removing the restriction. AFC continues to receive state funding for its successful program, and policymakers now understand more about AFC’s mission and the people served.

When broad buy-in is necessary or helpful in establishing priorities and a shared strategy. More voices equals more power.

How advocacy enabled diverse stakeholders to solve problems together.

LA County was in need of a robust public transportation system, the issue that Move LA was formed to tackle. Move LA understood that its mission would require widespread support and engagement and worked to create a policy table big enough to fit the broad diversity of voices in LA County in the discussion. This coalition’s efforts helped pass legislation that will build the world’s most modern transportation system and do so in a way that serves the diverse needs of stakeholders across the region.

Partnering with local and national organizations working in similar areas can increase your organization’s advocacy impact.

Child advocacy centers play an essential and state-mandated role in all child abuse allegations, investigations, treatment and prosecution. Despite this role, the most significant challenge faced by Children's Advocacy Centers of Tennessee was that very few, if any, of the elected officials knew who the organization was or the key role that the each center served in their local communities. No one understood how child abuse cases were brought to prosecution nor how victims of abuse were cared for, protected and counseled after the abuse became known. It was incumbent upon the board to educate the state's legislators about the child advocacy center model, its statewide impact, and the government mandate to coordinate the child protection investigative team in each judicial district across the state of Tennessee. This education resulted in legislators regularly calling the organization to testify as subject matter experts on issues and potential legislation that impacts children in Tennessee. 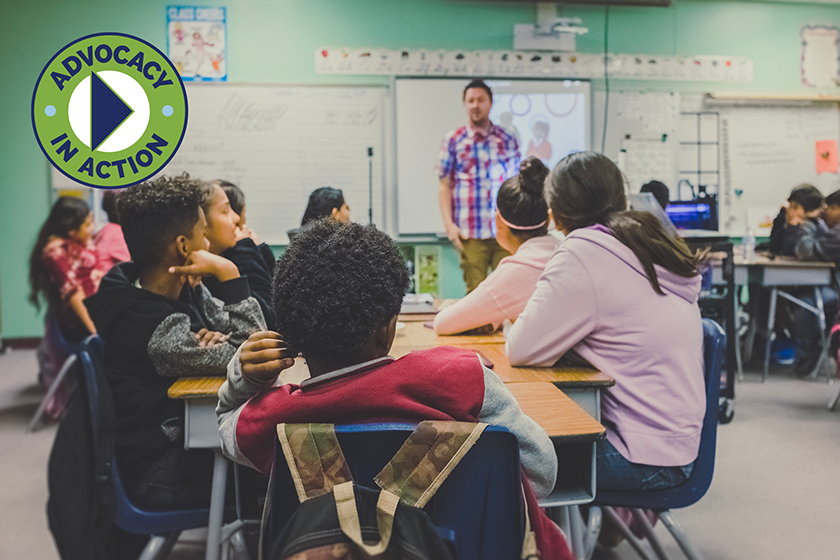 Wait a minute. I thought nonprofits were not allowed to advocate?

It is not uncommon for board members and other nonprofit leaders to misunderstand the law as it relates to nonprofit engagement in advocacy. The truth is, as a 501(c)(3) nonprofit organization, you have a legal right to advocate. And — when your mission and the people you serve are depending on you — you have a responsibility to do so.

But not all advocacy is the same, and there are some important things to know and understand.

How much does advocacy cost?

Here are some simple, free ways that advocacy could make a difference:

How do we know if advocacy will work?

The short answer is: You don’t. Just like with any program or fundraising strategy, there is no guarantee that your advocacy efforts will yield the results that you want 100 percent of the time. On the other hand, advocacy has the potential to deliver real, long-term solutions that enable nonprofits to leverage limited resources to maximum effect. And that’s what makes it worth it.

How can we make sure we’re following the rules around nonprofit advocacy?

There is a lot of confusion about the rules and regulations around nonprofit advocacy, in part because the legal guidelines are different for different types of organizations. We encourage you to review the resources available on this site to learn more about what’s definitely OK to do, where you need to check the fine print, and what’s definitely not OK for charitable nonprofits and grantmakers/foundations. 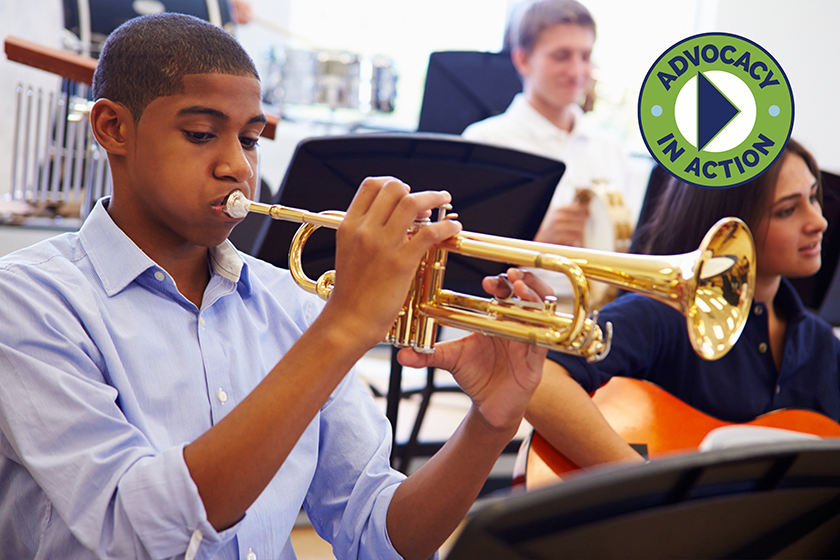 While advocacy has always been a pillar of its mission, ArtsFund was spurred to action in 2015 when the Washington State Legislature passed a bill allowing cities and counties to levy a tax in support of access to nonprofit arts, science, and heritage organizations. ArtsFund supported the bill’s passage for nearly a decade, and with its long-awaited approval came the opportunity to substantially increase funding for cultural organizations in its county should voters approve it by ballot initiative. To act on this opportunity, however, ArtsFund realized that it needed more focused board leadership and support around advocacy. In response, the board formed a board-led advocacy and policy committee, which enabled the organization to restore advocacy as a mission priority and expand its influence and impact. While the ballot initiative ultimately was defeated by a narrow margin, it energized the board and organization and was followed by a successful Seattle Mayoral Forum on Arts and Funding. Due to these efforts, ArtsFund is now considered a go-to counsel for policy decisions and viewed as a leader in Seattle’s cultural sector.

We call upon those boards and board members who are not yet standing for their missions through board advocacy to have a discussion about how to get started.